Naruto: Journey of the Three Failures – Strength to Go On 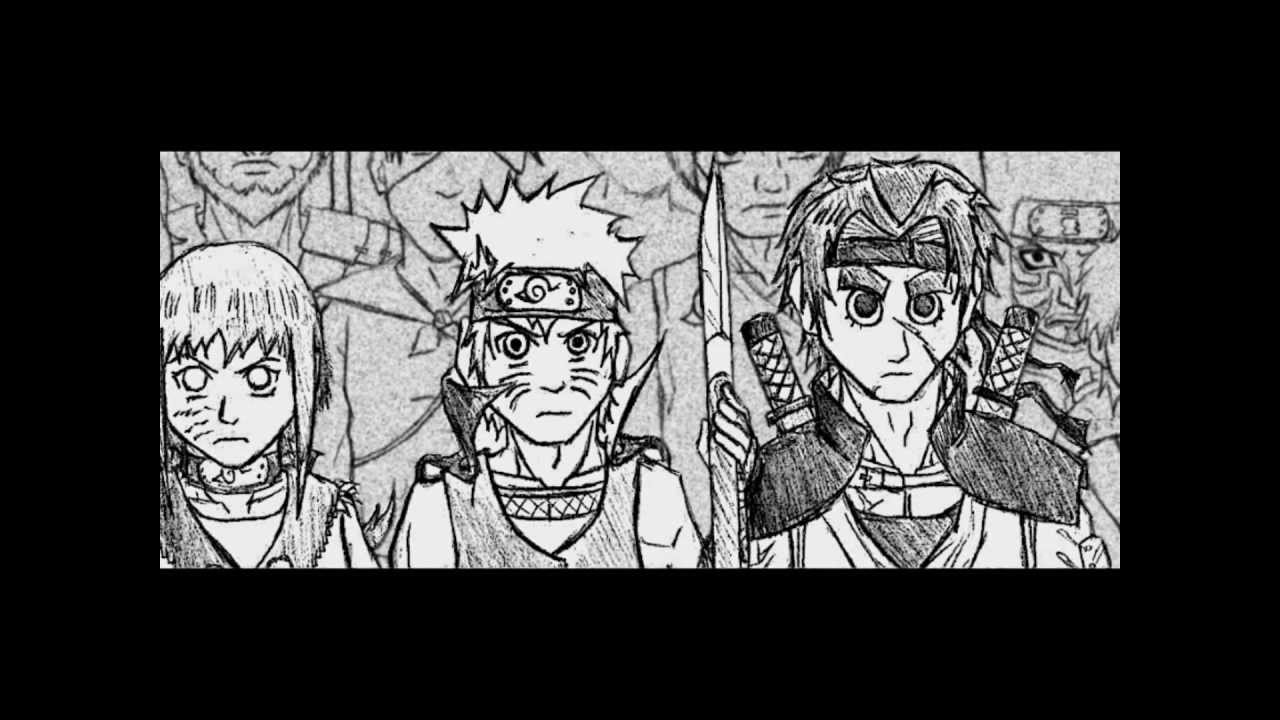 Finished this thing in the nick of time! Started more than a year ago and worked on on and off, taking quite a bit of computer paper, about 200 scans, and the occasional cheesy Gimp work, this mock-AMV thing (let’s call it an FFMV!) for my Naruto fanfic is finally complete 🙂

I think my drawing slightly improves as it goes along. For instance, see Jiraiya’s derpy-looking feet early in the video?? I have a much better feel for drawing feet at this point, which you may notice later in the vid. I decided to leave it as is, though ^^;

DISCLAIMER: I don’t own NARUTO or its characters, or The Strength to Go On, or any of that stuff, and am making no money either on the video or fanfiction.

WARNING: Excerpts! I mean, serious fanfic spoilers beyond this point.

0:42 Ch3, Neji: “Now… Someone, please teach our little rat a lesson.” I activated my Byakugan as Hanabi jumped in surprise twenty meters away. As a few Hyuuga raced from the room, her mouth formed a very foul word indeed.

0:44 Ch1, Lee: Two shadows raced for the wall of Konoha, one holding a sheet full of supplies in one hand … and crushing the corner of a now sweat-streaked photograph in the other.

1:03 Ch14, Hinata: Those who happened to be peeking from windows must have spotted and managed to recognize three battered, unsteady figures shambling up the street…. Someone began barking orders and yelling for a doctor. People streamed onto the streets in full disregard of the light rain, worried or stunned or apprehensive or joyous, but the lattermost prevailed as Naruto managed a weak grin and shaky thumbs-up.

1:19 Ch9, Hanabi (flashback): Wh-what… have I…?
Lightning flares.
There is blood on her hand. Her sister’s blood.
She clutches the girl tightly and screams into the night.
“Somebody, help!! Please — SOMEONE, SAVE MY NEE-CHAN!!!”

1:23 Ch12, Naruto: As if the timing was premeditated for what we were here to do, we halted at the end of the bridge as they halted twenty meters away. Three captains — and some two hundred-something shinobi behind.

1:59 Ch19, Hinata: …a light vortex of wind thrashed where he stood, lashing up messy hair, rippling his neat attire, and emanating a low, echoing hum — pouring a beast’s disembodied cry subtly into the air.

2:11 Ch12, Naruto (in dialogue with Torakou): “Just who are you?”
“The worst possible type of enemy: three determined idiots who don’t know when to give up.”

2:19 Ch13, Naruto:The brief flicker of existence, a momentary tessellation line of orange and blue — and it was as though a blade wielded by a giant had invisibly flashed down the line of soldiers, gouging a straight path of crimson instantly across all their bodies.

2:22 Ch14, Naruto: The stranger in the water was indeed me, I thought with some senseless, half-hearted disappointment. For a few weary seconds I stared, and glumly my forlorn face stared back…. The New Oto-nin’s spreading blood finally reached and blotted out my reflection.

2:26 Ch13, Naruto: (I) began raising a kunai in both hands…. I was fifteen yards behind the man and as far from the ground.

2:28 Ch13, Lee Suddenly I had sprung to full height, right knee off the ground, the glinting blade in my hand extended upward as it flowed in a grand, smooth crimson arc — after slicing from navel through sternum through clavicle and partially a side of the neck. His head was thrown back, an explosion of crimson erupting from his open mouth. He was still clutching the hilts of his ninjatou as the better parts of their blades clattered to the earth, cleanly severed.

2:33 Ch18, Hinata: Tsunade’s punch was blocked.
For an instant nothing seemed to happen…. My snarl-locked teeth vibrated… first slightly, then growing steadily in intensity until my teeth chattered as if with cold–
BOOM!
The earth exploded at my feet — fracturing with a tremor-jolt into slabs and blocks and chunks of stone, the recently level surface thrown into jagged disarray.

2:40 Ch4, Lee: “But here your argument falls to the ground.”
The weights crashed to the ground, and my heel crashed into Tenten’s jaw.

2:44 Ch13, Neji: …the tallest standing tree in New Konoha, a proud old oak. Perched atop it in an image of cool nonchalance that almost suggested their act was of little consequence, were Shikamaru and a few other ninja — one of whom waved a large, black flag slowly, methodically left and right…. I watched the mass of pitch fabric undulate and sway high in the still, bitter cold air. This was their response to the attack, and the message was clear enough…. The Nara’s eyes, though distant, found and locked squarely with my own in a challenge.

And from about 3:00 on is mainly teaser at this point 😉