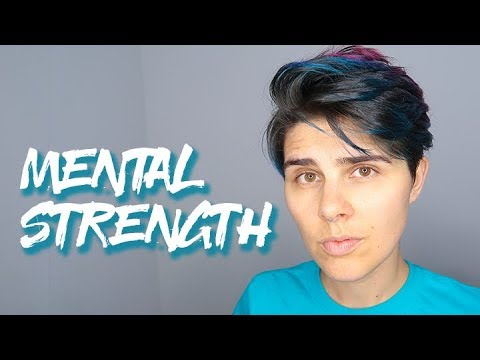 Mental Strength. Subscribe for more Awesome Videos: Powering through the itchiest I’ve ever been in my life. Today, we’re going to be talking about mental strength. I’ve done quite a few very mentally difficult things this year including my water fast, including rope swingy thing, including traveling around the world all by myself, and today has been my hardest day yet, and it has nothing to do with anything, as difficult as dealing with an uncontrollable itch slash pain slash pressure slash everything because of the rash on my hands. I cried a lot today. And I almost sabotaged quite a few things. If I’m going to stop, it’s going to be my choicet. But today really pushed it, a day of really, really feeling it, and it was super hard today. What did I use to get through it? Some of the things I used was breathing, taking deep breaths in and out, but not, I wasn’t really doing it calmly. I was doing it very aggressively because I was really angry. But it still helps, breathing still helps, even if you are angry and you breathe angrily, it still helps. What else helped? Somebody helping me helped. Brandon drove me around to go get some stuff that I needed because I can’t really drive right now. It’s not very reliable. Oh, that’s it, that’s all I got. I can’t go any more than that. How crazy is that? This hand’s okay. This hand’s doing much better, but this one… Oh. And I also made that promise to myself that I wanted to make it one year raw, and I didn’t wanna break it again for feeling sorry for myself or feeling less than or letting what was probably the itchiest I’ve ever been in my life get to me. But, the thing you have to remember is it’s in here, it is in here. Everything is temporary. Don’t let something negative affect your life in so many ways. I could easily have given in and broke my raw, broke the videos thing, and then scratched it and made it worse. There was many things I could have done to my own detriment to make the next few days, the next few weeks even harder on myself than just dealing with today, which was extremely hard. So, in times when you’re having that hard a thing you do have to kind of look ahead and remember that this won’t be happening all of the time. What else do I have for you? I don’t know. It’s just trying to convince yourself that you’re stronger than this, you can make it through this. You’ve made it through hard things. I’ve made it seven days without eating. Water fast, I thought that was excruciating and I don’t know how being itchy could be worse, but it is. I don’t get it, but it totally is. Just trying to figure out what the universe is trying to teach me, trying to make me strong so I can make other people, inspire other people to be strong too, because it’s really hard. Being strong doesn’t necessarily always mean you have the answers or you get everything right. It just means you power through. I’ve talked to a few people now about my hand, and now I’m pretty much at the point where I’m just going to have to let it run its course, so I don’t know how long I’m going to have to deal with this for. But I know it is temporary. I know it’s not something I will have forever. Because I didn’t have it for a while before, and I won’t have it again. Just a reminder to take better care of myself on airplanes and just to be careful. And do as much when you are feeling good because when you don’t, it’s hard. Take advantage of when you are feeling great. Don’t squander that time, because it is so important. I think that’s all I have. I hope this helps, maybe if you’re going through a tough time. You can make it through it. You are stronger than you think, I promise you. You are very strong. You have so much more mental strength than you believe. Because it is up here. It’s either, you hear that voice that’s like, “Screw this, we’re not doing this,” and you give into that, or you’re like, that guy’s like, “Screw this, we’re not doing this,” and you’re like, “I’m not listening to you. “I’m gonna do what I want and I want this.” Just take that with you into life.

😜 My Books On Amazon